One of the most hectic weeks for me is the last week in February. As luck would have it, every year, both the ADDYs and Jump Back Ball are in the same week. It makes for a fun, crazy, somewhat stressful week and this year was the same.

First up – the ADDYs. Otherwise known as the advertising community’s version of the Emmy Awards. This year we set a couple of different records – one for most entries ever (462 what?!?) and we also sold out the ADDYs. Almost two weeks before the show. We managed to squeeze everyone in (literally) thanks to the Lago Event Crew and come Thursday, I was ready for a great time with coworkers and friends. My good friends Jen and Tim hosted this year and they did a great job – I think they only made fun of me once (they just learned that morning how to say my last name….I’ve known them for years…) 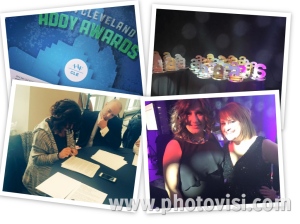 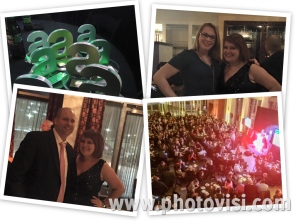 We won a few ADDYs (20!), I got to hang with Jen and my co-chair Anthony at the After Party and that’s a sell-out crowd!

We also added an after-party this year at Lago that was jam-packed, but also fun. I was able to finally relax (being cochair is stressful – thank you Gabe for hooking a girl up with a double jack and ginger). 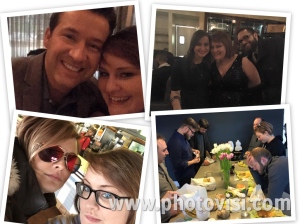 Hanging with Gabe, Carmen and AJ at the after-party…then the Friday aftermath…Kim and I buying McDonald’s for coworkers…

Saturday though it was time to prep and get ready for the annual Playhouse Square Jump Back Ball. Jess attended with me again this year and I, again, rented a dress from Rent the Runway (which I also did for the ADDYs). I’ve had such a great experience with Rent the Runway the past two years and was lucky that when I didn’t love my first choice, they sent a hot pink one which I pretty much was obsessed with.

Jump Back to the Future!

Again, guests nibbled on food from Driftwood Restaurants and Catering and I have to say that I loved the late evening snacks brought out right as the second band hit the stage in the lobby (has that always happened? Have I missed it other years!?) It was perfect timing for us. While this year I didn’t partake in any of the casino games, Jess and I both had our tarot cards read (fingers crossed they were right!) and danced to both of the bands that the committee selected this year.

One of my favorite parts about JBB is running into so many friends that I often don’t get to see as often. My second favorite part? Carrie and I singing on stage with the band. Yes, that happened again as Stephanie was looking lovely off-stage saying “you two just can’t stay away.” (I mean, it’s tradition now). 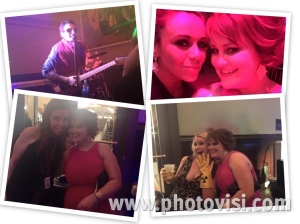 Somehow this year though I didn’t take nearly as many pictures. I think that just means that Jess and I were again having a great time and were enjoying our friends, the music and being at Playhouse Square!

Disclaimer: I’m the co-chair of the ADDYs and one the board for AAF-CLE. I’m in no way required to write about the event. I also am a blogger for Playhouse Square and was invited to participate again this year in blogging about JBB. In return for my blog posts/promoting, I received a buy one, get one ticket. But as always – I love Playhouse Square!