And see ya later winter.

It’s been a low key winter for the most part, which included a lot of hibernating. And to be honest – it was beyond needed. Call it the season I was in, or whatever you’d like, but I was feeling a little more introverted than usual and needed some quiet especially after a crazy holiday season.

To celebrate being cancer-free officially, we had some bubbles at work and then it was off to dinner and drinks with friends at one of my favorite locations – Hodge’s. While I was bummed Chris couldn’t be there, the team at Hodge’s brought back Raspberry Thyme which is one of my most fave drinks. 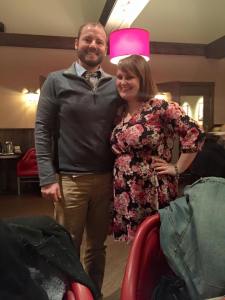 This girl. Wouldn’t be where I am without her.

Laughs were had. Tears almost happened, thanks to a speech by Jess and all in all it was a night to breath and realize that’s behind me.

More on the ADDY Awards and Jump Back Ball later. I mean, my feet are still recovering and I’m watching Chef Symon on All Star Academy.

Type A, City Dweller. Lover of all things CLE, bad pop music, coffee, reading, to-do lists and wine.
View all posts by Charlene Ann →
This entry was posted in Uncategorized and tagged 2015, Cancer-Versary, Celebrating, Laughter, Loves, Memories, No More Cancer, Pour Me Another, The CLE. Bookmark the permalink.