There was something in the air last week. The Indians were in the Wild Card Playoff Game and the Browns were looking to win another. People in CLE were nicer than usual. There was a general excitement in the air.

And my calendar was quickly booked with two back-to-back evening Cleveland sporting events. And this girl didn’t mind one bit. Pretty much all week I was counting down till the Tribe game on Wednesday. I was pretty excited to be going with my friend Ang – we’ve been trying to catch up for at least a month so this was the perfect way to spend some time together. After a killer happy hour at Hodge’s, we went over to get our seats, high atop Progressive Field. Despite the loss, we had the best time. I can’t remember the last time I laughed that hard.

Just a review of what happened in our section:

1. We made a new friend who was at least 50+ and clearly not interested in the Indians, but very interested in some $8 beers. So much so that she got lost, had a police escort up to our section, made friends with the guy next to her husband and at one point was in some serious prayer over the game.
2. We watched a breakup go down. It lasted at least 7 innings. And the poor Indians photographer just wanted to see if they wanted to get a picture of the two of them and our bro was just not having it. Ang was very concerned about if he was going to have a ride home from the game. 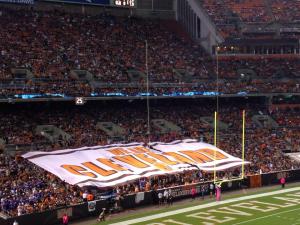 After that epic night, Thursday brought on tailgating in our work parking lot, with some of my clients and coworkers, and a Thursday night primetime Browns game. The weather was perfect, the Club seats were even better, and the company was fantastic. And the Browns won! And in that moment I think the entire city of Cleveland was happy again. 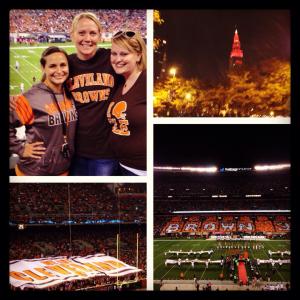 I can’t lie – after all of the sports emotion from the week – I needed Friday off. I slept in, worked from home and just enjoyed a day of rest and an evening catching up with my neighbors.

How’d you celebrate the big week in CLE sports?