Broadway in the CLE

The best part? The theme of this year’s series?

You will be following the journey of…some serious…leading ladies! From femme fatals to underdogs, you’ll see it all. You’ll be a part of their stories, feel their emotions and walk through their journeys with them. So what musicals will you be seeing?

Currently in London, with hipsters lining up to see the show, Sleeping Beauty is enchanting, while also seductive. Before you see the show, Gina from Playhouse Square suggests reading the book again. So yes, I did just add it to my library.

The story of Guy meets Girl. This musical brings you in and lets you be a part of the story, really…you will be able to hop on stage and grab a drink from the bar. As Gina explained, this is the soundtrack of our life. It’s won 8 Tony awards, including Best Musical.

The most complex heroine in the musicals, Porgy and Bess recently won best revival at the Tony’s. The show features passion, humor and love.

No one has brought more people to Playhouse Square than Andrew Lloyd Weber. In Cleveland alone, the revenue for the musicals/plays of Weber, has been above $200 million. You’ll be in a concert like setting, enjoying all of the memorable songs that have helped to shape the theater experience.

I have a thing for the 80’s so when this musical was announced, I was immediately excited. With songs like What a Feeling, the musical will show women (and men) everywhere that even when you think you can’t reach your goal, you need to always hang on to your dreams. Get ready with your fishnets and stilettos!

Telling the story of the legendary band, Jersey Boys dazzles audiences. I’ve seen the musical once before with my  mom and we both walked away singing along. Even if you are 65 years old, you will feel like a teenager again.

One of my top three favorite musicals, when Wicked was announced I literally squealed with excitement. The show is spell-binding. The imagination that brings you in while telling the story of a friendship, as well as the underdog, has you walking away knowing that you can do anything. The Wicked Witch shows you that you not only have the power, but you need to accept it. Like Gina said, it’s timeless story telling and it’s impossible to walk out of the theater not feeling that energy.

To finish the evening off, Gina answered questions…including one that I had asked! As always, this is some of the most anticipated news in the state. As someone that regularly attends the musicals and plays at Playhouse Square, I can tell you that the Broadway Series is completely worth the money. Shows will sell out.

And trust me…you don’t want to miss Broadway in the CLE. 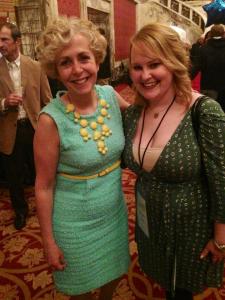 Disclosure: As a Playhouse Square Donor/Partner and an official blogger, I was invited to the announcement on Monday evening. I was also invited to host a giveaway. All opinions are my own.

1 Response to Broadway in the CLE