A week late I know. But last week I went to the best concert I have ever been to. Janet Jackson – #1’s – Up Close and Personal 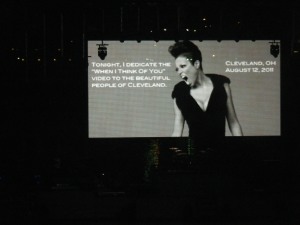 Jacob’s Pavillion, aka Nautica, is by far one of my favorite concert venues and I’ve been able to see two concerts (in two weeks) there. There is no bad seat at the Pavillion and both concerts this summer have been on the perfect summer night. Janet’s could not have been a better not.

The crowd: the most diverse, amazing crowd I have ever been a part of. Seriously, every ethnicity and every age. There were 4/5 year olds that we saw and right next to them was a couple that probably were in their 70’s.

Janet: AMAZING. She sang and danced her way through so many of her number 1’s. I don’t think I sat much at all during the concert. She danced her booty off – much more so than some of the younger “stars” do (i.e. Britney – though I do love her too!) One of the things that I think I loved the most was how down and dirty this concert was. No elaborate pyro displays, simple videos (mostly shown while she went backstage) and a small stage. But I was bummed that she wore the same outfit throughout the entire concert – surprised too!

Concert of the summer. End of story.

Set List: The Pleasure Principle, Control, What Have You Done for Me Lately, Feedback, You Want This, Alright, Miss You Much, Nasty, Nothing, Come Back to Me, Let’s Wait Awhile, Again, Doesn’t Really Matter, Escapade, Love Will Never Do (Without You), When I Think of You, All for You, That’s the Way Love Goes, Black Cat, If, Scream,, Rhythm Nation, Encore: Diamonds, The Best Things in Life Are Free, Together Again 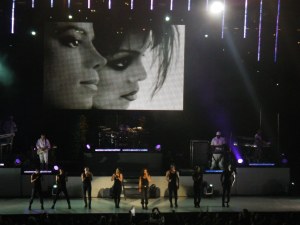 Type A, City Dweller. Lover of all things CLE, bad pop music, coffee, reading, to-do lists and wine.
View all posts by Charlene Ann →
This entry was posted in Uncategorized and tagged 20-Something, 2011, Cleveland, Inspire, Laughter, Party, Summatime, The CLE. Bookmark the permalink.